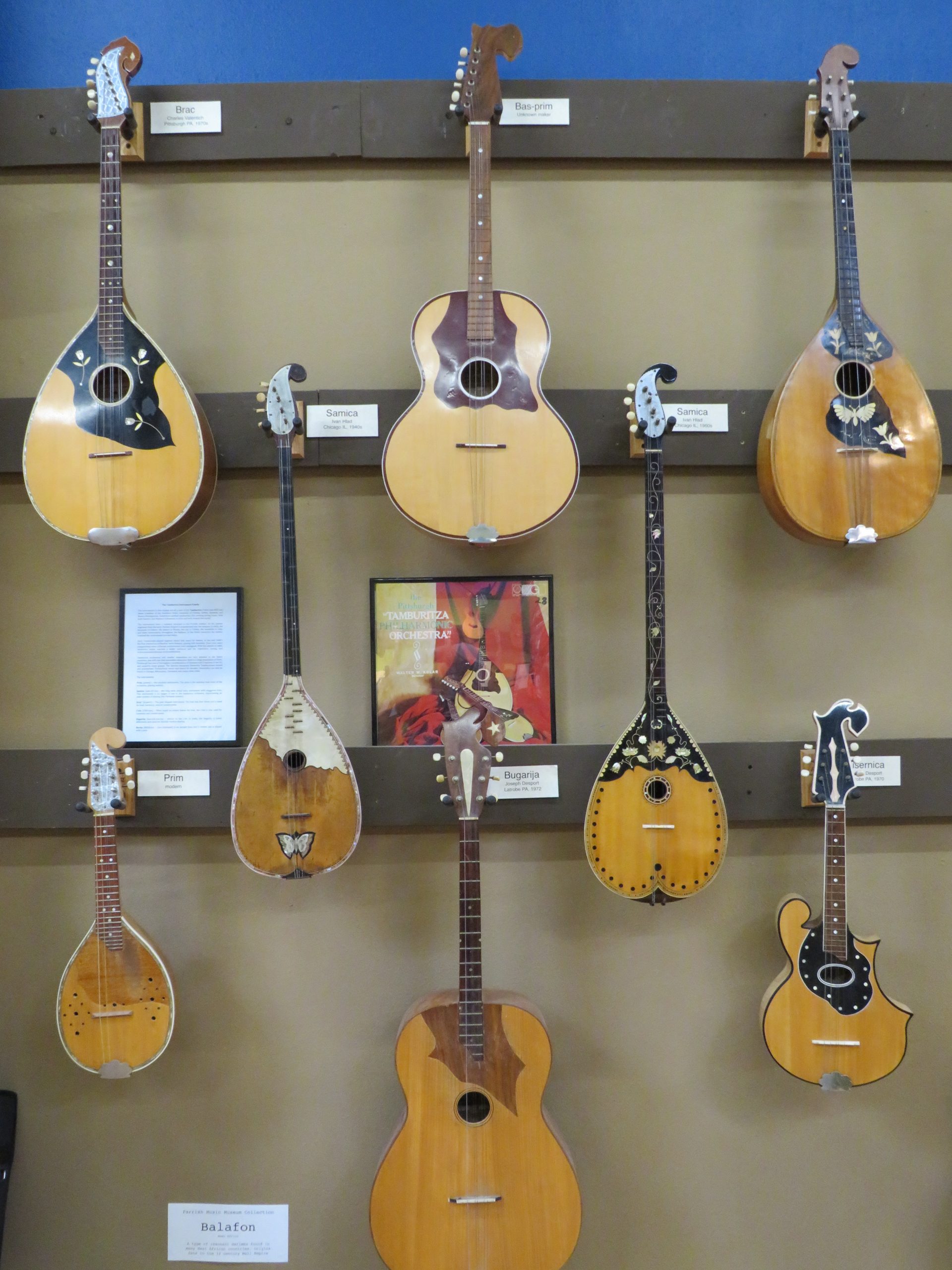 The instruments in this display are all a part of the Tamburica (Tahm-boo-REE-tsa) music tradition of the Southern Slavic countries of Croatia, Serbia, Slovenia, and Bosnia-Herzegovina. Sometimes spelled tamburitza, this exciting string music, with both Eastern and Western influences, is alive and well around the world.

The instruments have a common ancestor in the Persian tambur. As the tambur migrated from the early Persian Empire it transformed into the tanpura in India, the bouzouki in Greece, the domra in Russia, the saz in Turkey, the mandolin in Italy, and other instruments throughout the Balkans. In the Slavic countries the tambur inspired the instruments you see today.

Early Tamburashi played regional ethnic folk music for dances. In the mid 1800’s the first tamburica orchestras were formed, playing folk melodies. Over time many compositions were collected, orchestrated, and catalogued. With the advent of radio, tamburica music reached a wider audience and the repertoire, tuning, and instrumentation became more established.

Tamburica orchestras and smaller ensembles are very popular in the Slavic countries; you will also find ensembles wherever there is a large population of Slavs. Pittsburgh has one of the highest concentrations of Serbians and Croations in the US, and supports many groups. The famous Duquesne University Tamburitzans toured and popularized Tamburitzan music and dance for decades. Ensembles can also be found in Chicago, Milwaukee, Cleveland, and many other cities.

Prim (preem) – the smallest instrument. The prim is the soprano lead voice of the orchestra, playing melody.

Samica (sam-EE-tsa) – the long neck, small body instrument with staggered frets. This instrument is no longer in use in the tamburica orchestra, representing an older system of playing (the Farkaash system)

Brac’ (braatch) – The pear shaped instrument. The brac has four tones and is used for lead, harmony, and/or counterpoint.

C’elo (CHE-low) – Often tuned an octave below the brac, the c’elo is also used for harmony and counterpoint.

Berda (BEAR-da) – (not displayed) is an upright bass, but is fretted and is played with a pick.