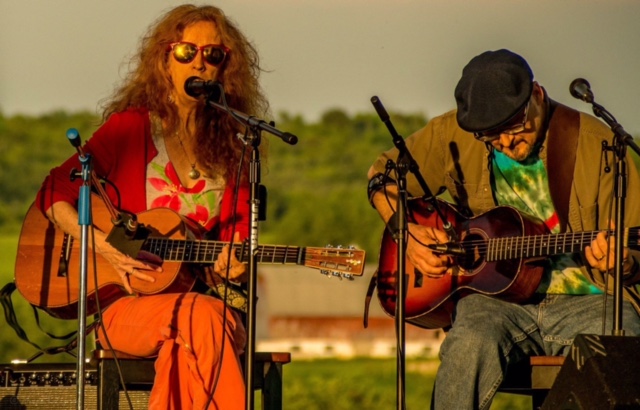 The Parrishes – Catherine and Ted

The Parrishes are Catherine and Ted Parrish, an acoustic duo from Viroqua Wisconsin. They write original songs that cross the bridge between folk and blues, using musical knowledge honed through decades of performing, recording, and teaching. Catherine’s soaring vocals are the focal point of all the songs, with their multi-instrumental skills deployed on whichever instruments each song requires, whether guitar, ukulele, mandolin, banjo, or flute.

Calling Viroqua home since 2007, the couple originally met in Chicago while teaching at the venerable Old Town School of Folk Music. They had different gigs in the big city: Catherine performed traditional Irish Music and had a successful career as a performer of music for children (including four recordings, one winning a Parent’s Choice Award, and guest spots on two Ella Jenkins CDs) while Ted was busy playing in blues bands around the city (including a 10 year stint at Buddy Guy’s Legends with the Barbeque Boys), playing slack key guitar in a Hawaiian band, and managing a large retail music store.

Their two musical worlds converged since relocating to Viroqua: together they began to perform an eclectic mix of songs including standards, blues, folk tunes, and obscure gems from the past. Since 2014 they have dedicated themselves to collaborating on their original acoustic music – songs and melodies that blend their musical styles and experiences. Their music showcases the passion and skill developed over many years of dedication to their art. They also opened Parrish Music, their very own music store and school, and share their love of music with students and friends from the Driftless region.

Their debut cd of original music, Live in the Studio Volume One, was released in May of 2017. Volume Two followed in December of 2018. Catherine and Ted’s original songs have been heard recently at The Great River Folk Fest, Larryfest, Fosstival, Intergalactic Shaktifest, Leo & Leona’s, The Root Note, Driftless Books and Music, Richland Center Performing Arts Center, Musical Chairs, live on WDRT-FM, and many other musical venues and events in the Driftless area.

Please visit our website to listen to music and find out more about what we are up to.

Please call or text and we will make arrangements. Leave a message on the store line 608-637-7730. You can also text Ted’s cell at 608-606-5699. Please note that we cannot always answer the phone right away as we may be online with lessons.